Sargomma is a company on a journey, just like its components, which are installed inside vehicles across the globe. Mostly made up of women, it serves as an example of how female entrepreneurship can make its mark.

Creating increasingly innovative and efficient solutions to breathe life into even the most complex projects. Inspired by this mission, Giuseppe Sardo founded Sargomma in Turin at the end of the 1980s, a company specialising in the production of components made from rubber and plastic for a range of applications in different areas, from the automotive and the marine sectors to industry. Back then, the automotive sector was growing rapidly, and the company's founder, motivated by a passion for agricultural and earth-moving machinery, began to create solutions designed to improve the comfort of operators, as well as to overcome the common issues they faced. That moment marked the first step in the road to success for the company, and thanks to the experience of its founder and the quality of the components, it became a key point of reference for manufacturers both in Italy and abroad. "Sargomma was founded 40 years ago, on the basis of an idea of Giuseppe Sardo, my father. In 1981, driven by his passion for the agricultural machinery sector, he began to study products that could improve the comfort of these machines, and thus founded Sargomma. Over the course of the next 20 years, we became the point of reference for manufacturers in Italy and internationally", affirms Brigitte Sardo, General Manager of Sargomma. With the arrival of Brigitte at the helm of the company - a moment that represented a turning point and a major event in a male-dominated sector - Sargomma has made a number of key choices that will enable to company to expand into new markets. "Female entrepreneurship has always been marginal in our sector. However, in recent years, I've had the pleasure of seeing many women distinguish themselves in this area and assert themselves both as professionals and leaders, with the support and backing of others", continues Brigitte. The Sargomma team, half of whom are women, was awarded the "Mela d'Oro - Women Value Company Intesa Sanpaolo" at the fifth edition of the award in 2021, in recognition of the important role that Sargomma has played in nurturing female talent, through its innovative and inclusive gender diversity policies. 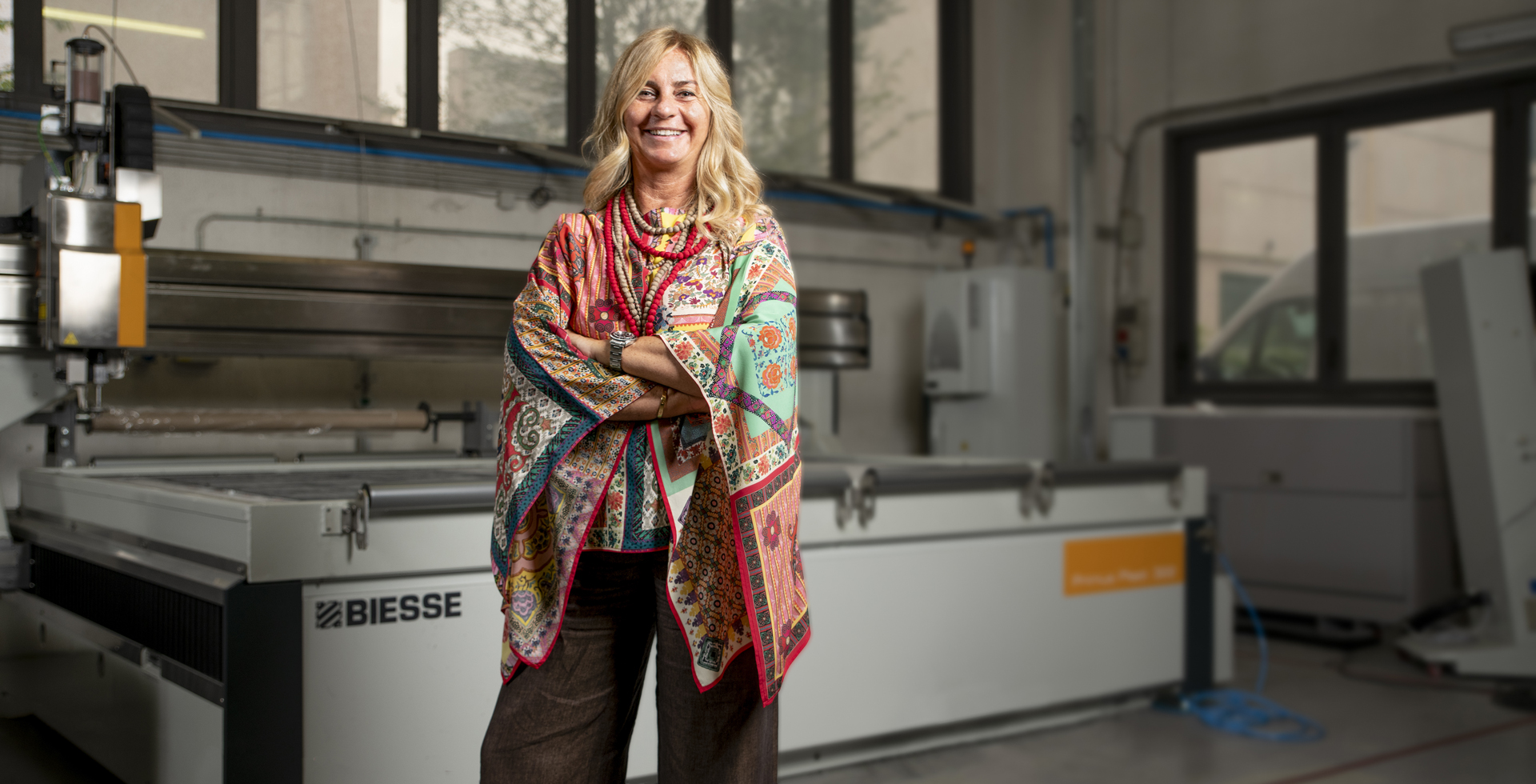 Sargomma's activities are dedicated to the design, development and production of rubber and plastic components, including for the most complex systems, using rubber moulding, co-moulding, extrusion, pre-forming, die-cutting and waterjet technologies. It was for the latter of these that the Turin-based company decided to invest in the purchase of the Primus 322 waterjet technology system. “We work for a number of leading vehicle manufacturers, and took our first steps into the world of waterjet cutting four years ago. We developed this sector for all of our clients, and as part of this, we chose to purchase our Primus 322, with a view to improving the speed at which we can respond to their requests", confirms Giulia Calvi, Product Development Manager. Biesse and the innovative start-up Orchestra have worked together to forge a strong relationship with Sargomma, founded upon the analysis and monitoring of production data, with the help of the new Industry 4.0 systems. "SOPHIA IoT is at the heart of the support we offer; this system enables us to monitor the machine and keep a close eye on the client and their production," explains Paolo Scorpo, Area Manager for Biesse. The partnership between Biesse and Orchestra has led to the creation of a digitised and customised solution, tailored to Sargomma's specific needs. "Orchestra is an innovative start-up founded 5 years ago in order to provide Industry 4.0 technological solutions designed specifically for small and medium-sized enterprises. It stands out from the competition due to its ability to interconnect new and existing machinery with company computer systems. We can therefore guarantee access to the benefits of the 4.0 transition plan, whilst simultaneously offering these SMEs a sustainable system for digitalising their manufacturing processes" confirms Martina Moietta, Marketing Assistant Orchestra Web.

"This machine integrates perfectly with the other machinery that we already have in the company; the 3m x 2m cutting surface makes it possible to create parts of larger dimensions, and moreover, the power of this solution enables us to cut compact and extra-thick rubbers. Our customers really appreciate this cutting finish.” 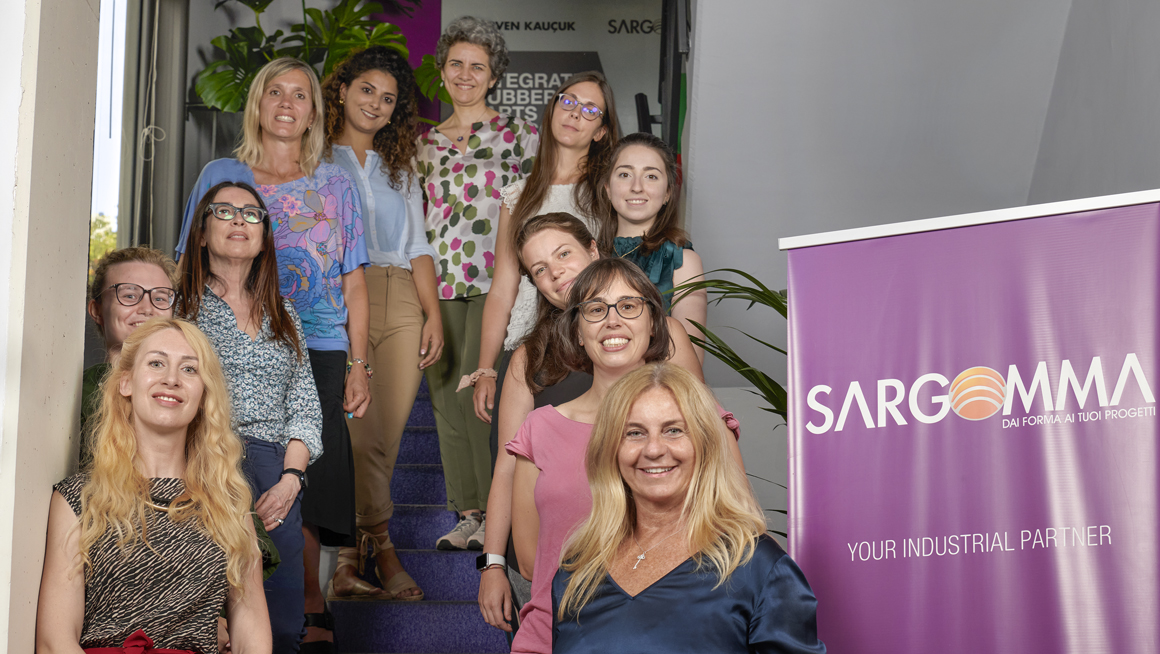 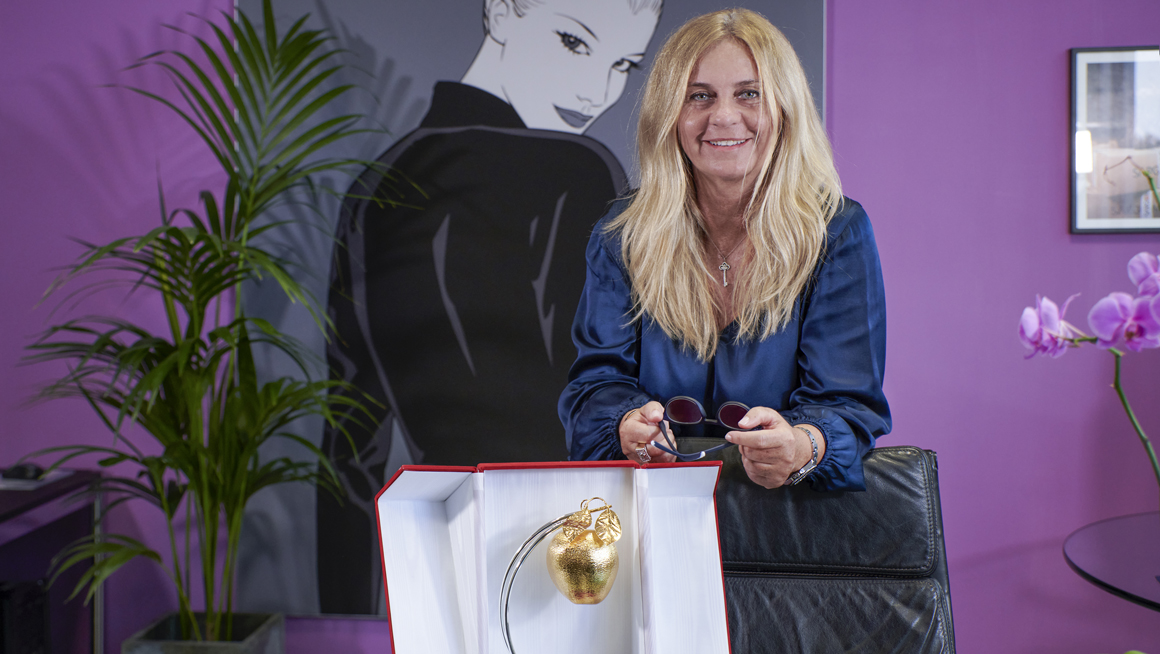 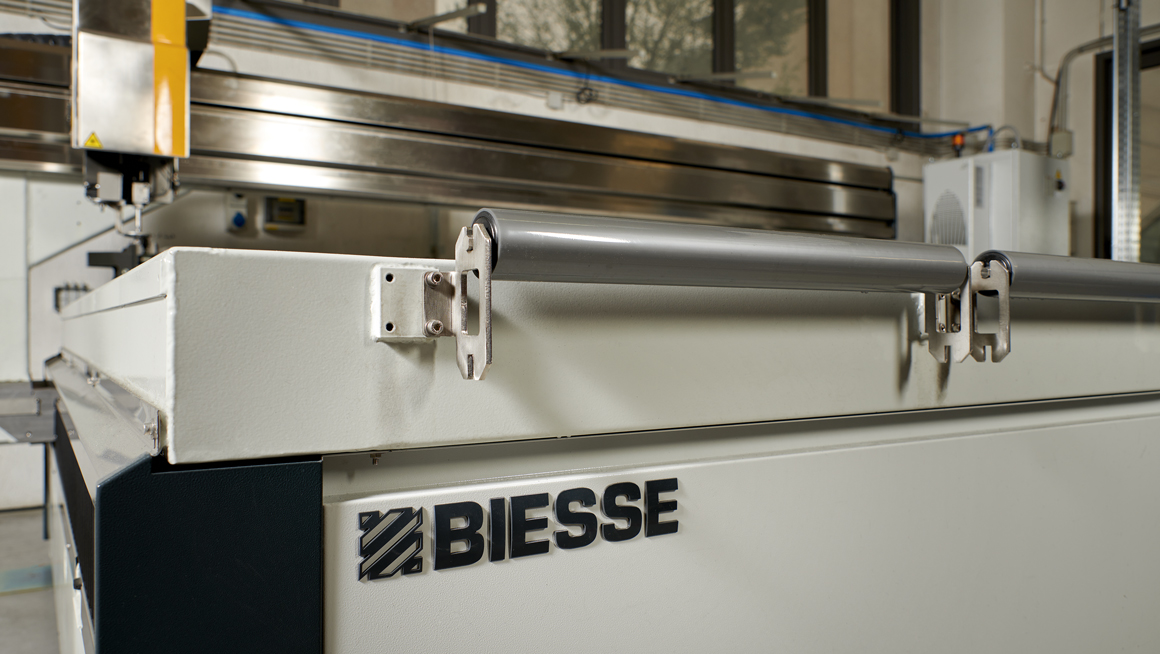 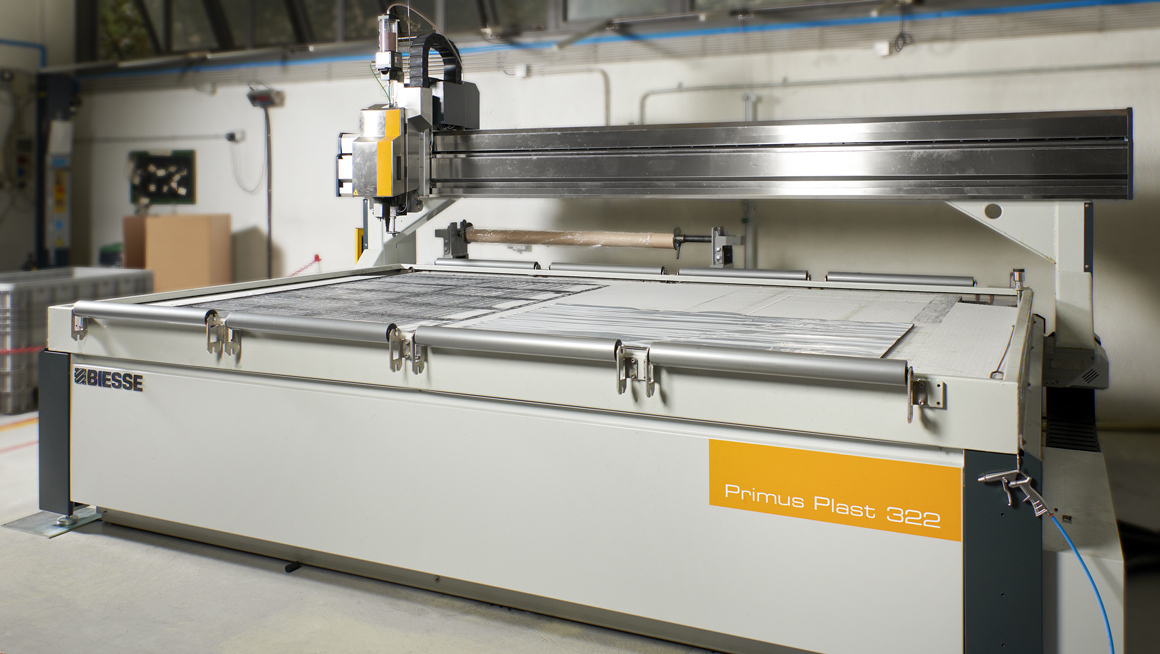 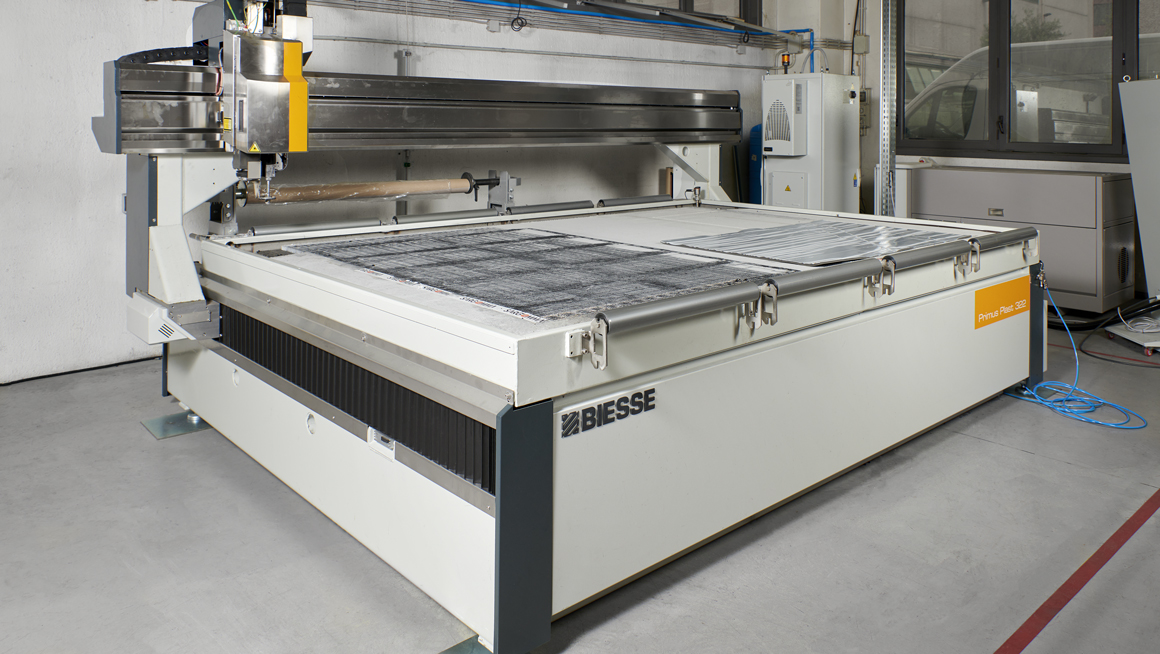 Great ideas need a great partner.
Discover how you can transform your business with Biesse by your side.
#MadeWithBiesse
All the case histories
Crosa
Crosa has a fifty year history in the distribution of industrial technical components and is known for high quality service. The company from the Piedmont is constantly growing and innovating and is a strategic partner in various industrial manufacturing settings, especially the food, beverages and packaging sector.
Read more
3P Glazing Solutions
Today, 3P Glazing Solutions is a point of reference in the field of encapsulated glass and polycarbonate windows for car manufacturers and car glazing producers all over the world.
Read more