Sunrise Kitchens of Surrey B.C. has nearly completed its $12 million expansion, which included a significant investment in automated equipment and company CEO Paul Bhogal couldn’t be happier.
“This expansion allows us to increase our production capacity to better serve the requirements of the construction and multi-family development industry,” he said.

As part of the expansion, Sunrise Kitchens added 35,000 sq. ft. to its existing facility to create a total of 80,000 sq. ft. The expansion was designed to support their transformation towards more automated manufacturing applying Kaizen principles, along with lean manufacturing in order to provide an even greater value for their customers.
Bhogal said the increase in automation also offers them more precision, enhanced efficiency and a 50 per cent increase in capacity allowing manufacturing with shorter lead-times and higher quality products. 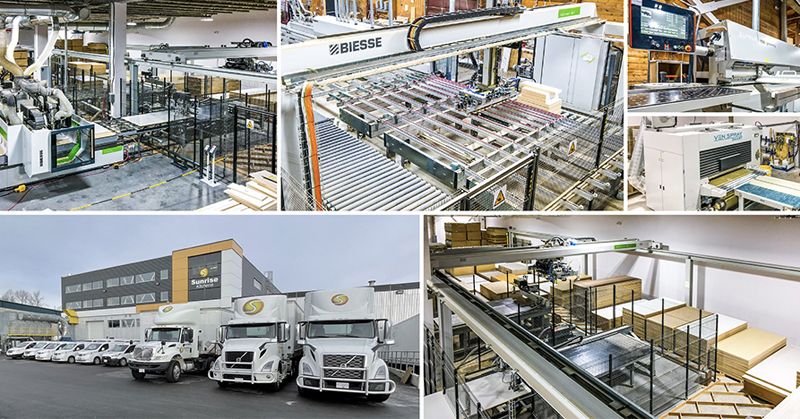 It all started in a barn at the back of a farm
The expansion represents a major accomplishment for the thriving family business that started in a garage in the early ‘80s.
Paul’s father, Sohan Bhogal, started the company in Richmond, B.C. as a small garage operation shortly after he moved his family to Canada.
“My father was looking at a number of opportunities for a business when we came here, and given his background in manufacturing, he decided on kitchen cabinets,” Paul Bhogal says.
“So he started a small garage operation in the barn at the back of a farm, he worked hard and was successful and then in 1986 he moved to Surrey because he saw there was a lot of growth happening here after the new bridge was built. He moved to a one-bay space of about 2,000 sq. ft. until 1990, when I decided to join him full time.”
Bhogal says he first started working in the family company helping out after school.
And when he decided to join his father full time, they also decided to change the name from Bhogal Cabinets to Sunrise Kitchens.
“At first, after I’d finished high school, I went on and did some other ventures, also in woodworking, with a few partners, but eventually I decided to come back to the family company.”
Bhogal said that once he joined his father, one of their goals was to really grow and expand the company.
“We had about 10 employees at that time and we had just moved to a larger, 6,000 sq. ft. space,” he says.
“Over the years we kept growing and kept expanding the space until, in 2010, we outgrew it and had to move again. By that time we had been slowly expanding the size of the building to about 14,000 sq. ft.
“That’s when we purchased our current premises.
“Now we had 40,000 sq. ft., to which we added a mezzanine office space for a total of 45,000 sq. ft. We picked that property because it had an additional acre of unused land for future growth. And that came in handy now because it allowed us to stay where we are and use that land for our expansion.”
For the past 38 years, Sunrise Kitchens has built a thriving family business manufacturing kitchen cabinets in Surrey, B.C. and today, they continue their journey to become a world-class, industry-leading manufacturer with some 125 employees.
Bhogal’s wife Harjinder, had joined him in the business a couple of years after he started working with his father.
“My wife looks after all of the accounting, the important stuff,” he says.
And their daughter Amrita joined them in 2018 after completing her HR degree.
“She has been working on our people and culture and she was a big part in implementing kaizen and continuous improvement throughout all departments,” Bhogal says.
In fact she has been doing such a great job, the Wood Manufacturing Council recognized her last year with its Innovation in Human Resources Award – Individual.
“She has worked really hard to change the culture of our company and began implementing new processes – such as lean - to make us better,” he says.
“She’s played a huge role on the people side. She started implementing weekly meetings for the employees and when COVID-19 hit, for example, she’s worked to make sure everyone is safe and stays positive. That has made a big impact.”
Bhogal says his daughter’s work to keep the team going and develop a positive attitude and strong morale has made a huge difference.“You may not notice right away what’s changing, but things are definitely changing towards the better and slowly the whole team starts to work towards it.
“So the teamwork and all the people behind the scenes here are all part of the our success. And many have been here for many, many years.”
And now, their son Navjot, who has been working with them part time, is set to complete his business management and marketing degree and will then join them full time as well.
“He has been working here already for a couple of years,” Bhogal says, “and in April he will join the family business full time. So the third generation of Bhogals is in place and will be taking the lead of the future of the company.”
Bhogal says they’ve built
their success through trust, innovation and a commitment to growing their industry and community partnerships.
“We have advanced our production with automated equipment, offering increased capacity, shorter lead-times, and overall greater value to our customers.
“And we are focused on quality. Quality products, quality service and a quality experience for our customers.”

Constantly innovating
Bhogal said as they continued to grow, he realized, in about 2016, that another expansion would become necessary in the not-too-distant future.
“So we started to feel that we needed to grow again and get the next phase of our expansion going and we started to plan for that in 2017. We did some architectural work and towards the end of 2018 those plans were more or less ready.
“We then hired Lignum Consulting and Sepp Gmeiner to help us.”
Bhogal says the plan for the new building was to add an additional 35,000 sq. ft. to the shop area to expand their production capability.
“We wanted to add more capacity both via the expansion, but also through more automation in our processes,” he says.
When they started their plan for another increases in size, they were doing around 200 cabinets per day and the goal was to expand that significantly, to at least 300 cabinets per day.“We started to work on this with Sepp (Gmeiner of Lignum Consulting), we were looking at plans for the new space and we also looked at the flow of our production line.”
Funny thing was, that even before the new building was completed, and thanks to their initial work with Lignum Consulting, Bhogal says they managed to increase production in their old facility to 280 boxes per day with just some small changes.
They added some equipment - upgraded their dowel machine to CNC and added another clamp for assembly - and rearranged the flow. Nothing major, but it had quite an impact.
“Now I realize for some shops that would be a big change, but considering our overall picture, for us it was a small change,” he says.
Bhogal even jokingly told CKCA members during their tour of Sunrise Kitchens’ facility last February, he didn’t think he’d need the expansion anymore even though the building was nearly completed.
“Yes, when we were talking the last time, with the new building still under construction, we had managed to increase our existing capacity to 280 boxes with one full shift and a skeleton shift. So we are running some equipment for 16 hours,” Bhogal says.
“But now with the new facility and the added equipment, we can go back to eight hours and produce 320 to 350 boxes.”
And that, he adds, will free up one entire shift for future use if and when they need it.
“So we could easily add an afternoon shift again, which means we have some room to grow.”
Of course the whole expansion and move towards more automation meant they had to make quite an investment in new machinery as well.
“We added a full 120 ft. by 36 ft. automated material handling system from Biesse, which feeds our routers,” Bhogal says.
“We also added three more nesting routers, two from Biesse and one from C.R. Onsrud.”
Asked why he is mixing and matching machines, Bhogal said the two Biesse routers are integrated with the Winstore, but he also wanted one standalone machine for odds and ends and doors.
“We got the Onsrud because it is supposed to be very stable and fast.”
They already had two other Biesse routers that also continue as standalones.
“And then we added a fully-automated Biesse edgebanding line as well, and we also still have two other edgebanders, one IMA and the other a HOLZ-HER, which we are also running as standalone machines.
“On the finishing side we have a fully-automated Cefla line, and we just added another paint line from Venjakob.
“We’ve always wanted to try Venjakob and they had a machine ready to ship, so we bought it.”
This is also an automated line, but Bhogal says it doesn’t have the oven.
“But we have built a separate flash off oven with Sun-Spot. We wanted a paint line without an oven, so that was our solution for that.

We still have plans for the next three years for continuous investments of another $12 million to bring us as close as possible to automate everything, to Industry 4.0 level. 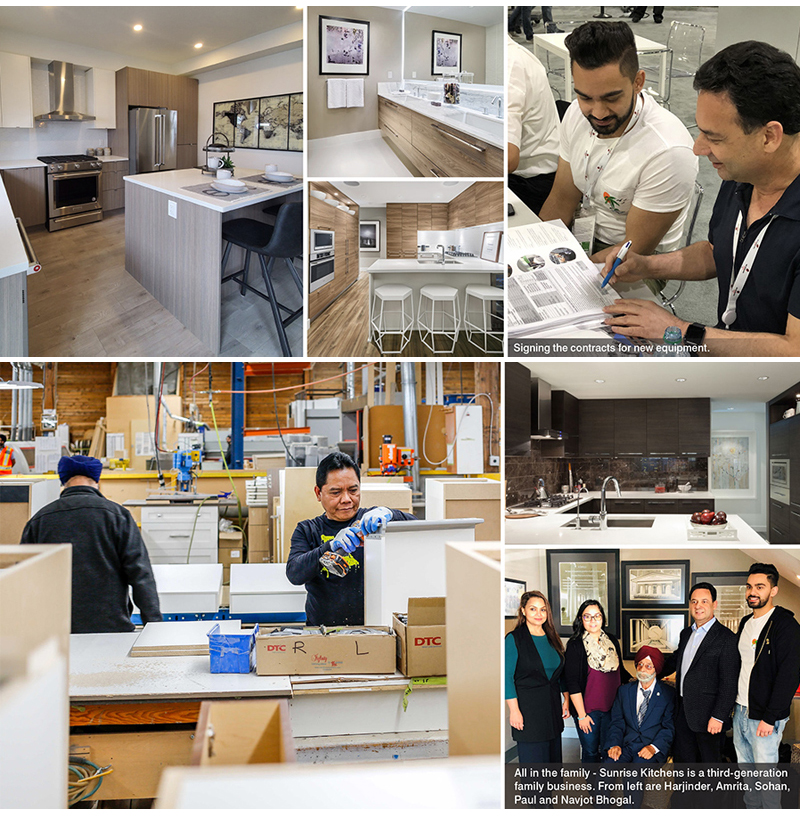