Responding to the skilled labour shortage

The BFM’s latest Furniture Trade Survey, conducted in October 2021, found that 76% of furniture production businesses are suffering from skill shortages. Manufacturers of kitchens, bathrooms, home offices and shop fittings are feeling the squeeze, with machinists in short supply.

In this context, Biesse has developed two new features for its Selco beam saws to assist less experienced operators. These new tools take some of the complexity out of the cutting operation, minimise the margin for user error and have the potential to boost operator efficiency.

The Tracking Light system is simple yet ingenious. Different LED patterns above the beam saw guide the operator through each job, ensuring each strip is correctly positioned as per the cutting pattern that has been created by the machine’s optimising software. This minimises the risk of pieces being cut incorrectly, or strips being passed though in the wrong orientation - both of which result in costly waste and rework.

A major advantage of this feature is that the guidance is on the beam saw itself, rather than on the machine’s control panel. This means that rather than having to look at a screen while trying to operate the machine, the operator’s attention is fully focused on the saw. What’s more, because this feature communicates via lights rather than verbal or written instructions, it can be universally understood by users of any nationality.

Here’s how it works in practice…

The operator calls up the cutting pattern on the control panel and the LED bar above the beam saw displays a flashing white light to indicate that the panel needs to be loaded. Before creating any pieces, most operators will make a 10-15mm wide trim cut to ensure that subsequent cuts are square. The Tracking Light will then show a solid white strip, which tells the operator that the trim cut needs to be offloaded.

Usually, the board is loaded lengthwise and the rip cuts (the cuts parallel to the longer side of the board) are carried out first. A solid blue light will tell the operator when each cut has been completed and if strips require manual rotation to perform a crosscut, this will be indicated via a blinking white light. If a piece requires a z-cut (an additional or third rotation) the LED strip will turn blue green. A solid green light shows that a piece is completed and ready to be removed from the machine.

The light signals and sequences are highly intuitive and easy to learn and memorise. As a general rule, a flashing light indicates that a panel needs to be loaded onto the machine or moved into position for cutting, and a solid light means that a piece can be offloaded. Another clever feature of the Tracking Light system is that the length of the illuminated LED strip corresponds to the width of the piece to be passed through the machine. In addition, in cross-cut mode, the dimensions of the strips to be cut will be marked via individual solid LEDs within the flashing light bar. This ensures panels are passed through the beam saw in the correct orientation and sequence.

The benefits of the Tracking Light system are augmented when it is used in conjunction with another operator assistance tool for Selco beam saws: Smart Stacking.

Available as an add-on to Biesse’s optimiser software, Smart Stacking is a visualisation programme that assists with the organisation of cut pieces on pallets, trolleys, or conveyors. By giving the operator a real time view of where each piece should go once it has been cut, the Smart Stacking feature makes machine offloading and pallet loading streamlined and efficient. Without this feature, the operator has to consult the cutting list for each individual piece to make sure it ends up on the right pallet.

Smart Stacking uses colour coding of pallets and pieces to ensure the right pieces end up on the right pallet. Each pallet in the offloading area is assigned a colour, and each piece in the cutting pattern is assigned a colour that corresponds to the pallet it needs to be loaded onto. This information is displayed in a simple graphic format on the machine’s interface. A quick glance at the screen will tell the operator in real time which pallet each piece is destined for, as it comes off the beam saw. While grouping onto two or three pallets simultaneously is the norm, the software has the capacity to manage more, up to six pallets if required. 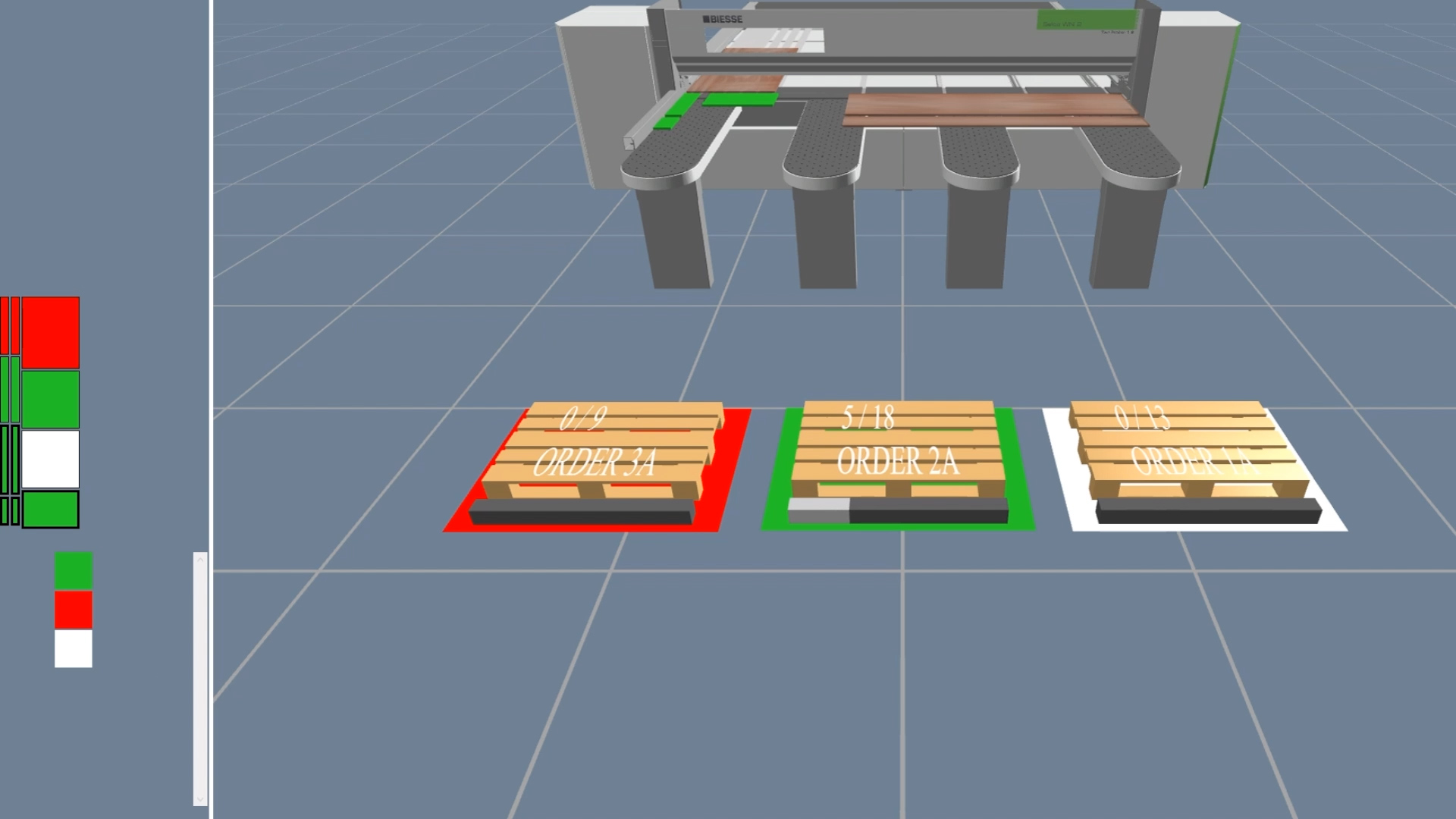 Here’s how it works in practice…

This feature comes into its own when cutting patterns are ‘mixed’ rather than ‘dedicated’ to a particular customer or project. From an optimisation point of view, it is often more efficient to produce pieces for customers A, B and C from the same panels, rather than producing customer A’s pieces first, followed by customer B’s and customer C’s. However, this can make grouping of the cut pieces onto pallets complicated, confusing and time-consuming, with a high possibility of pieces ending up on the wrong pallet.

Another scenario in which Smart Stacking is incredibly useful is when pieces are grouped according to secondary processing requirements. It might be that some pieces require drilling, some require edging, and some require drilling and edging, and need to be loaded onto three different pallets accordingly. With Smart Stacking it is very easy for the operator to identify which pieces are destined for which pallet.

One PLC or two?

The Smart Stacking programme can be accessed via the same PLC as the Selco’s operating programme, Open Selco Interface (OSI), which involves the operator switching between the two ‘windows’. This arrangement works well for manufacturers running long batches with infrequent changes to the machine’s parameters. Where smaller batches are the norm and settings are constantly changing, for ultimate ease of use, Biesse recommends two PLCs so that both programmes can be accessed instantly and simultaneously. 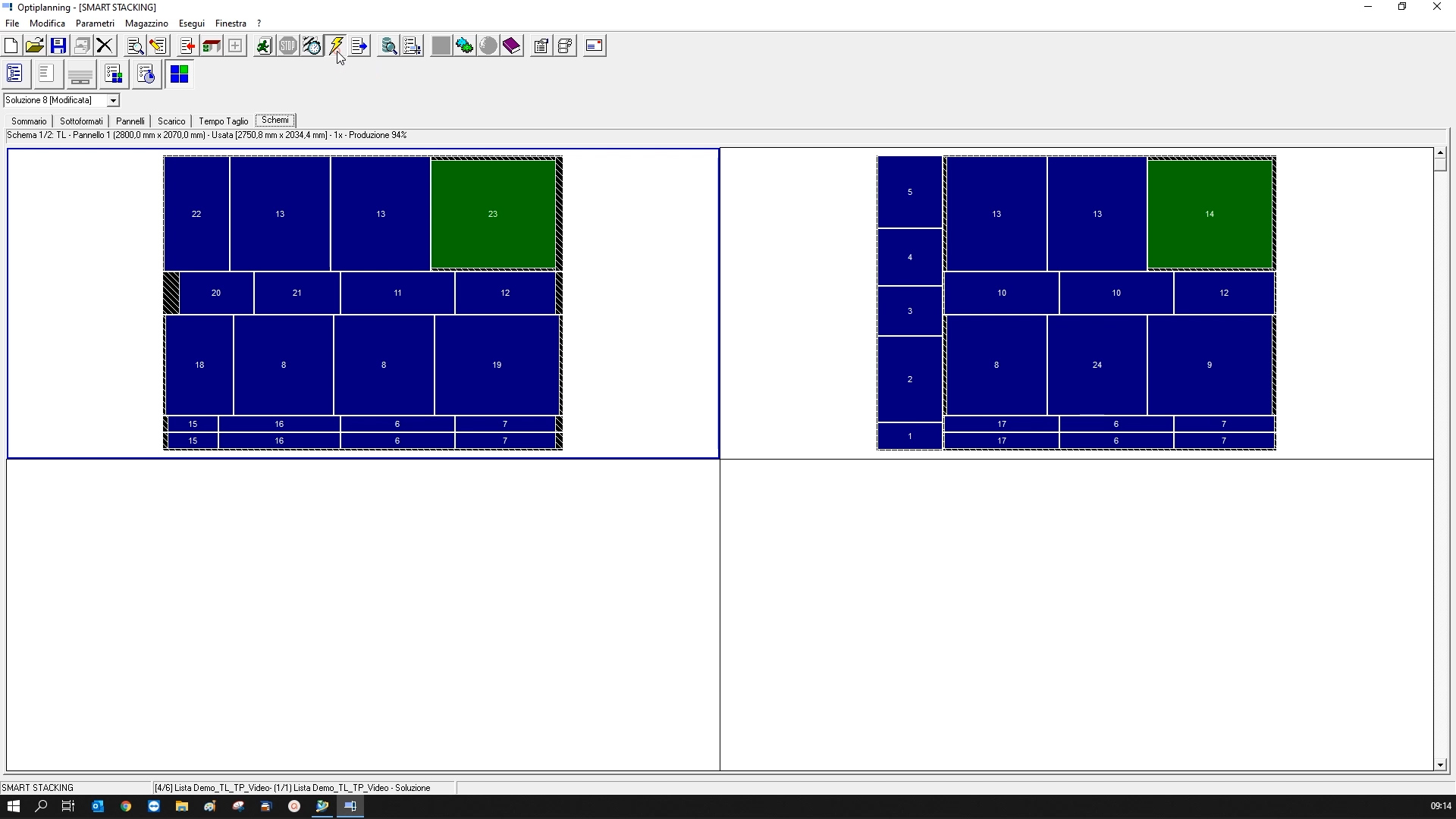 See our machine in action.