When plastic processing equipment manufacturer 3PA took the strategic decision to bring its supply chain in-house, trials and first batch production at Biesse’s Tech Centre were key to de-risking the investment. By taking the plunge and engineering its own plastic conveyor components on a Rover Plast FT CNC machining centre, 3PA has vastly improved its profit margin on build projects and slashed production time on bespoke conveyor orders.

Since 2005, 3PA has been supplying the market with plastic processing machinery, from blow moulding and injection moulding equipment to robotic automation systems. As well as selling and installing machinery from its workshop in Northamptonshire, 3PA sources machinery from all over the world, including Portugal, Germany, Italy, USA, Taiwan, China and Korea.

Conveyor systems are one of the company’s most successful product lines, accounting for 20% of its overall business. In this crowded marketplace, 3PA’s made-to-measure capabilities give it a competitive edge.

“We are one of the few conveyor suppliers who manufacture to order. A lot of companies only supply what is in the catalogue, whereas we design to a customer’s specification to achieve a perfect fit and an aesthetically pleasing factory layout,” says Dave Evans, Managing Director of 3PA.

Historically, 3PA outsourced the fabrication of conveyor components to a third party. However, they were produced on an ageing, obsolete machine that was becoming increasingly unreliable, leading to delays and unpredictability. 3PA could see that bringing production in-house would give it tighter control over the overall process whilst driving efficiency.

“Bringing our supply chain in-house was something we had been looking at for a few years; we could see we would be able to react faster to exacting customer requirements and be more innovative in our design,” recalls Dave.

Investing in its own machining equipment was a huge leap of faith for 3PA, so it was seeking a partner with a proven track record who would provide a consultative approach during its switch to automation. After obtaining three quotes, 3PA opted for Biesse, whose cutting-edge machining centres are renowned for their performance on plastics, composites and thermoformed materials. Several factors influenced this decision, including Biesse’s reputation, the short lead-time it was offering and its comprehensive educational Tech Centre where customers can get to grips with the machines, run proof of concept trials and build relationships with the customer service team.

“Not only were we able to see the machine that we were planning to purchase – a Rover Plast FT – in operation at Biesse’s Tech Centre in Daventry, we also had the opportunity to test-manufacture our conveyor components prior to purchase,” says Dave.

The components 3PA was looking to produce included conveyor frames, belt guides and side frames. These parts are not particularly complex to machine, but 3PA’s requirement for producing an array of different components with minimum waste from a single sheet of plastic presented a challenge.

“The biggest challenge with nesting is making sure the parts don’t move before they are finished. The best way of ensuring this is to generate less heat, as then you automatically generate less lateral force and there is less likelihood that the part will move,” explains Biesse UK’s Commercial Director.

To this end, Biesse equipped the machine with a high speed 36,000 rpm (revolutions per minute) electro-spindle to help minimise lateral force.

“Typically, this type of machine would use a 20-24,000 rpm head. With the 36,000 rpm head we can work with a single flute tool because of the higher rotational speed. This means we can achieve the same cutting rate with 50% of the heat generation,” says Biesse UK’s Commercial Director. 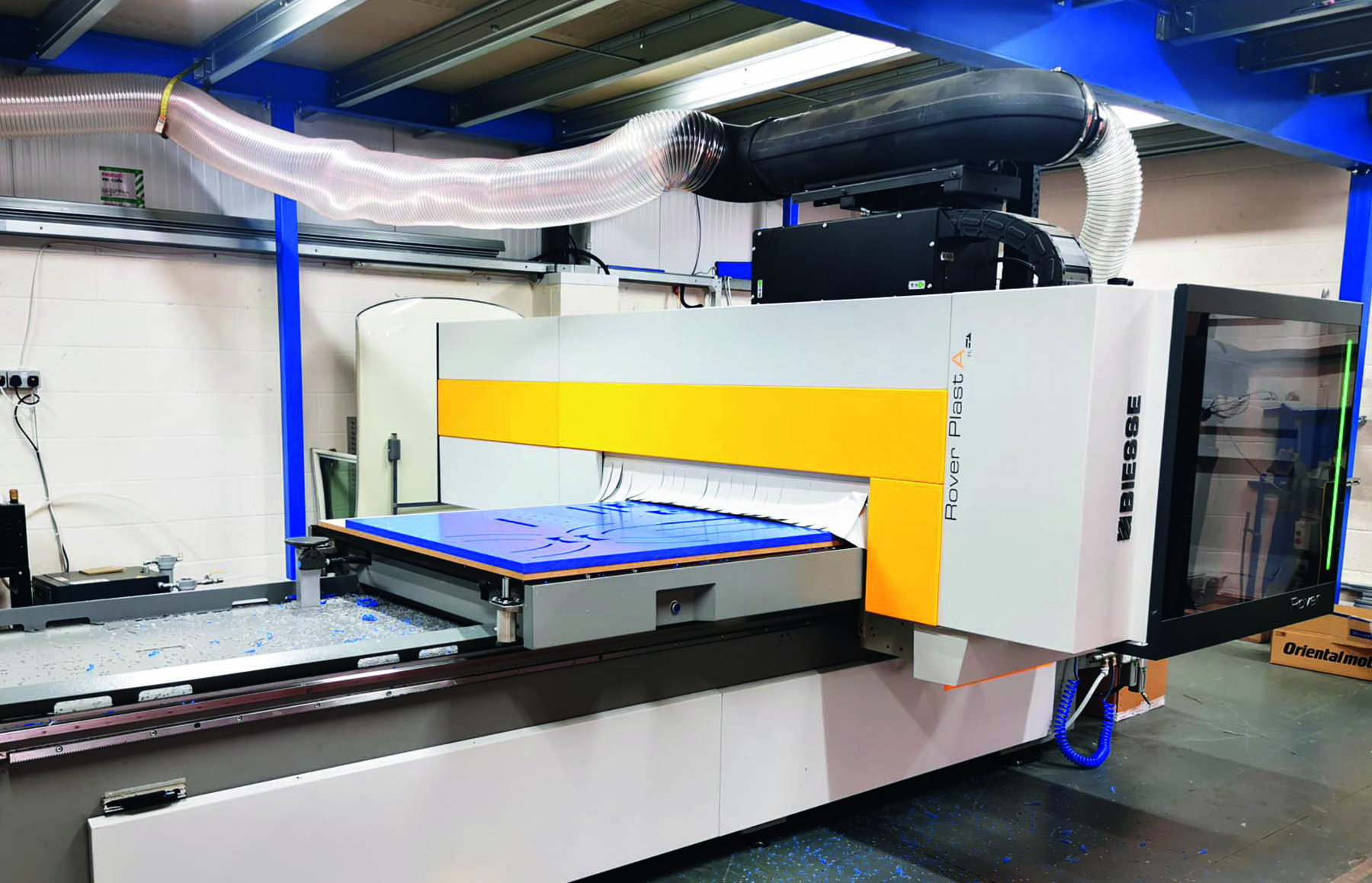 Although the Rover Plast FT was ready to install, 3PA wasn’t quite ready to accept the system. With conveyor orders stacking up, Biesse offered to fabricate 3PA components from its Tech Centre to prevent loss of revenue.

“Our factory wasn’t ready in time to produce the first batch of components so Biesse said they would do it at their Tech Centre. We sent an operator and some materials to run the Rover system in the facility. As well as helping us to honour our commitments, this meant we benefitted greatly from the knowledge of on-site technical staff who walked us through best operating practices. For us, this kind of support was confirmation that we’d chosen the right supplier,” says Dave.

Six months have passed since the machine was installed and 3PA is already seeing the benefits of bringing its conveyor supply chain in-house. The company has maximised its profit margin on conveyor projects and is gaining a reputation for offering a flexible, made-to-measure service and high build quality.

“Thanks to the precision performance of this machine, our customers know they are going to get a UK made product that is well built, works efficiently and looks good in their factory,” notes Dave.

Through a combination of increased margins and projected growth, 3PA expects the Biesse system to deliver a ROI within three years.

As well as providing capacity for growth, the machine incorporates a number of features that could potentially help 3PA to take its business in new directions in the future. These include an ioniser for cutting static materials, an oscillating knife for foam and porous substrates and an air cooling system for keeping the tool and material cool.

The machine has several special features that we aren’t using at present. However, we wanted to buy a machine that would give us more than we need today. Our turnover is growing steadily, and thanks to the Rover Plast FT, we are confident that we have a conveyor manufacturing process that can flex with future demand.