We are at the dawn of a new horizon, a new world that will no doubt bring a host of benefits. We must manage this transition in the best way possible in order to ensure that we continue to grow.

Biesse S.p.A. has further strengthened the bond between man and machine, thanks to decades of R&D and investments designed to develop digital factories. Robotization and digitalization of factories were the highlight of the company’s presence at this year’s Ligna.

From the 27th to the 31st of May 2019, in its 6,000-square-meter stand, the Italian company featured 49 new technologies live in action and three key processes that are now fully automated from the raw material stage down to the finished product stage.

Several integrated lines and robotized cells displayed never-before-seen levels of customization, modularity, and flexibility, which are the fundamental requirements for contemporary production.

"We are currently experiencing a real revolution, an industry-wide transition to digitalization,” said Roberto Selci, CEO of Biesse Group. “We are at the dawn of a new horizon, a new world that will no doubt bring a host of benefits. We must manage this transition in the best way possible in order to ensure that we continue to grow.”

Selci continued, “Today, a new language is being spoken—the language of the young engineers who take a totally different approach to the one we once knew, and which, when combined with the experience of those who have been in the company for a number of years, can lead to the development of important new skills."

From small to large-scale technologies

During the exhibition, the company showcased its array of advancements in various categories and demonstrated that these solutions cater not only to large-scale enterprises with sizeable production volumes, but also to small businesses looking for flexibility and personalization from smart factories.

Seven ROS (short for Robotically Operated System) were featured at Ligna with a new and improved Feedback Positioning System that delivers better speed, productivity and safety. ROS is Biesse’s latest solution for large-scale handling of panels for sizing, boring, sanding, and CNC machines. as shown in the interactive demonstrations, the use of robotic systems has proven to thoroughly maximize efficiency by simplifying processes. 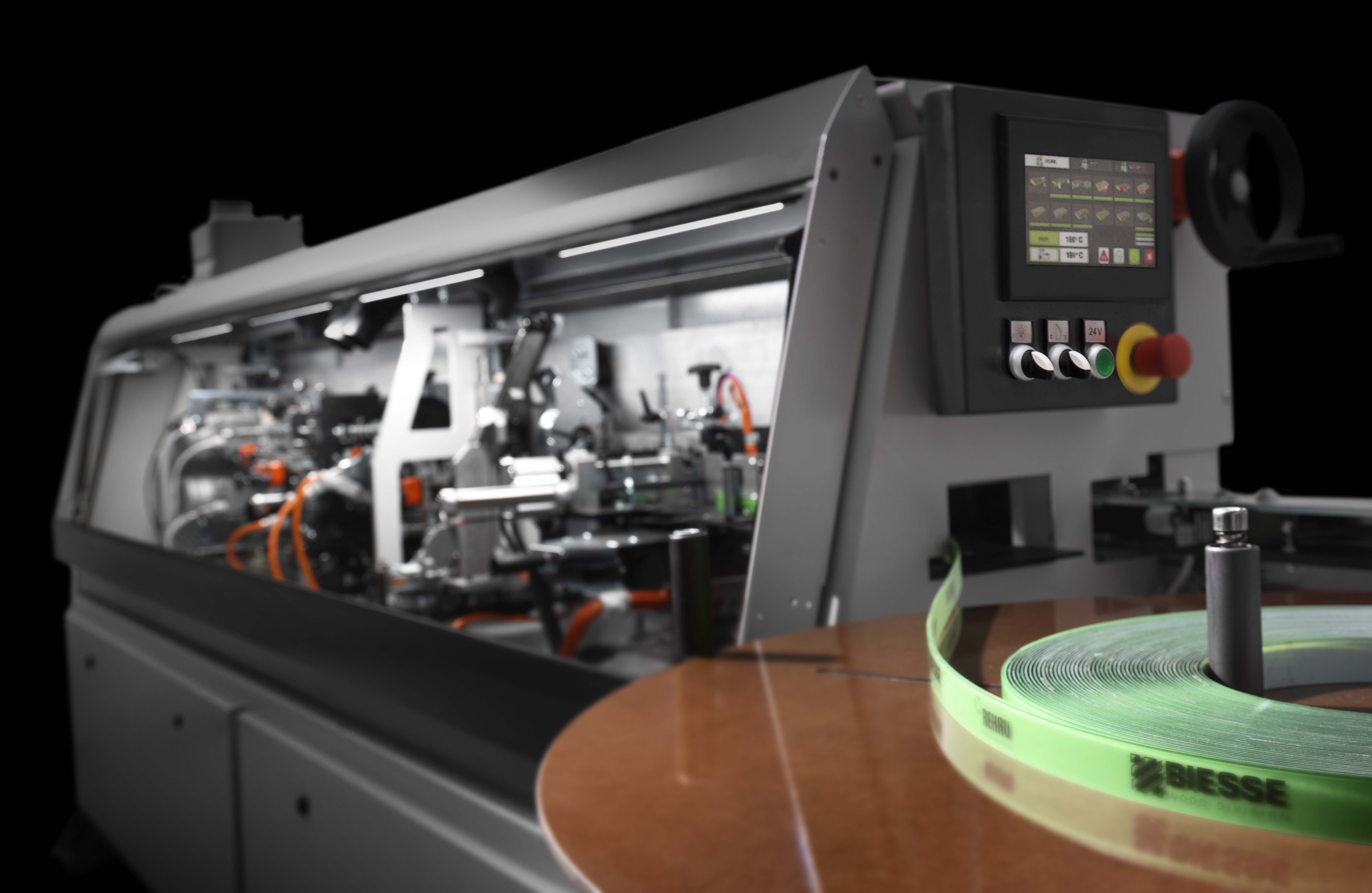 On the other hand, a brand-new edgebanding machine for small-scale producers was also introduced. The Akron 1100 is Biesse’s most compact, automatic, single-sided edgebanding machine that takes up the least amount of space in the production area compared to other machines in its category.

The small size of Akron 1100 does not mean it lacks features. The Akron 1100 is the only machine in the market in its range that offers top-of-the-line components such as the ROTAX motors from HSD, as well as a seven-inch touchscreen control screen that provides an intuitive user interface. 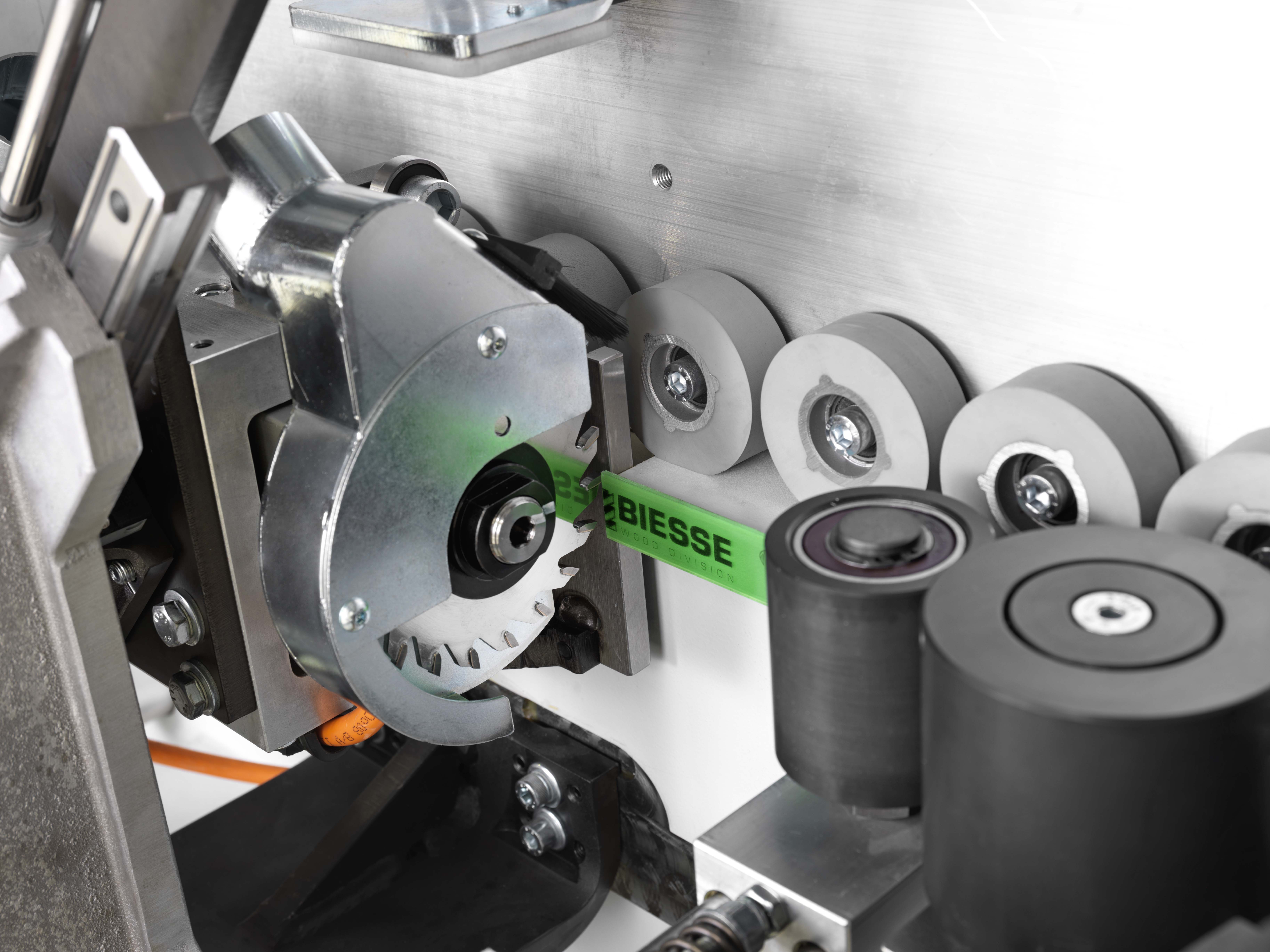 Available now in the Middle East region, the Akron 1100 boasts of unique features that reveal the outstanding engineering that has gone into this machine—a rigid structure and linear guides with ball blocks that ensure precision, suctions for panel cleaning, and a removable glue unit vat for optimum finishing, to name a few.

This journey began with SOPHIA, Biesse’s IoT service platform aimed to make the factory more efficient. SOPHIA has now expanded its functionality to embrace predictability, which has greatly improve the machine’s interaction with the customer and significantly reduced the time required for assistance.

By placing people at the heart of machines, Biesse has developed software that is more user-oriented. In fact, ideas are constantly taken from a dedicated team that closely follows customers’ day-to-day interaction with the software. This practical approach ensures that software is designed for simple and practical day-to-day use, minimizing complexity.

Part of the stand at Ligna 2019 was Biesse’s Digital Hub where visitors were able to examine new software applications found in Biesse technologies. These include SOPHIA, B_CABINET, B_PROCESS, B_AVANT, B_SUITE and OPTIPLANNING. 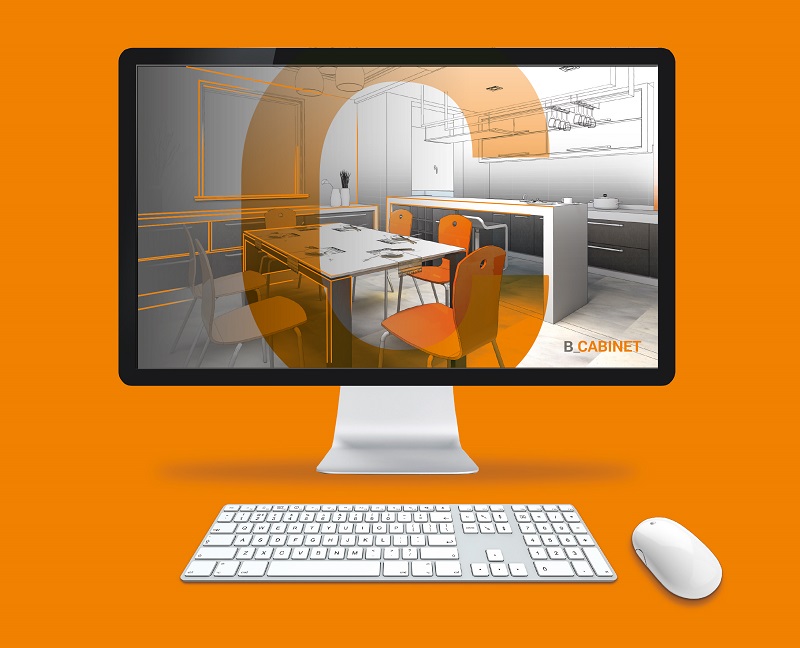 One of the most notable software during the event was B_CABINET, an integrated digital manufacturing solution for managing furniture production from the 3D design phase to production flow monitoring.

Designed with designers and architects in mind, B_CABINET allows for the quick transition in a single environment between creating the single elements to generating photo-realistic catalogue images and generating technical prints to producing requirement reports.

Purchased separately from the machine software, B_CABINET can also be used to operate non-Biesse machines in the production process.

With B_CABINET, there are now limits on design. The interior design has evolved thanks to the integration with Blum, a leading company in the furniture accessories market.

B_CABINET is now complemented with a new supplementary module, B_CABINET FOUR, which allows for easier real time monitoring and management of machining phases such as cutting, milling, boring, edgebanding, assembly, and packaging.

B_CABINET FOUR can be used to quickly and efficiently send information to each workstation of the production process—the job order, the production sequence, additional information on each assembled part or project, the machining and cutting lists, and the PDF assembly diagram. 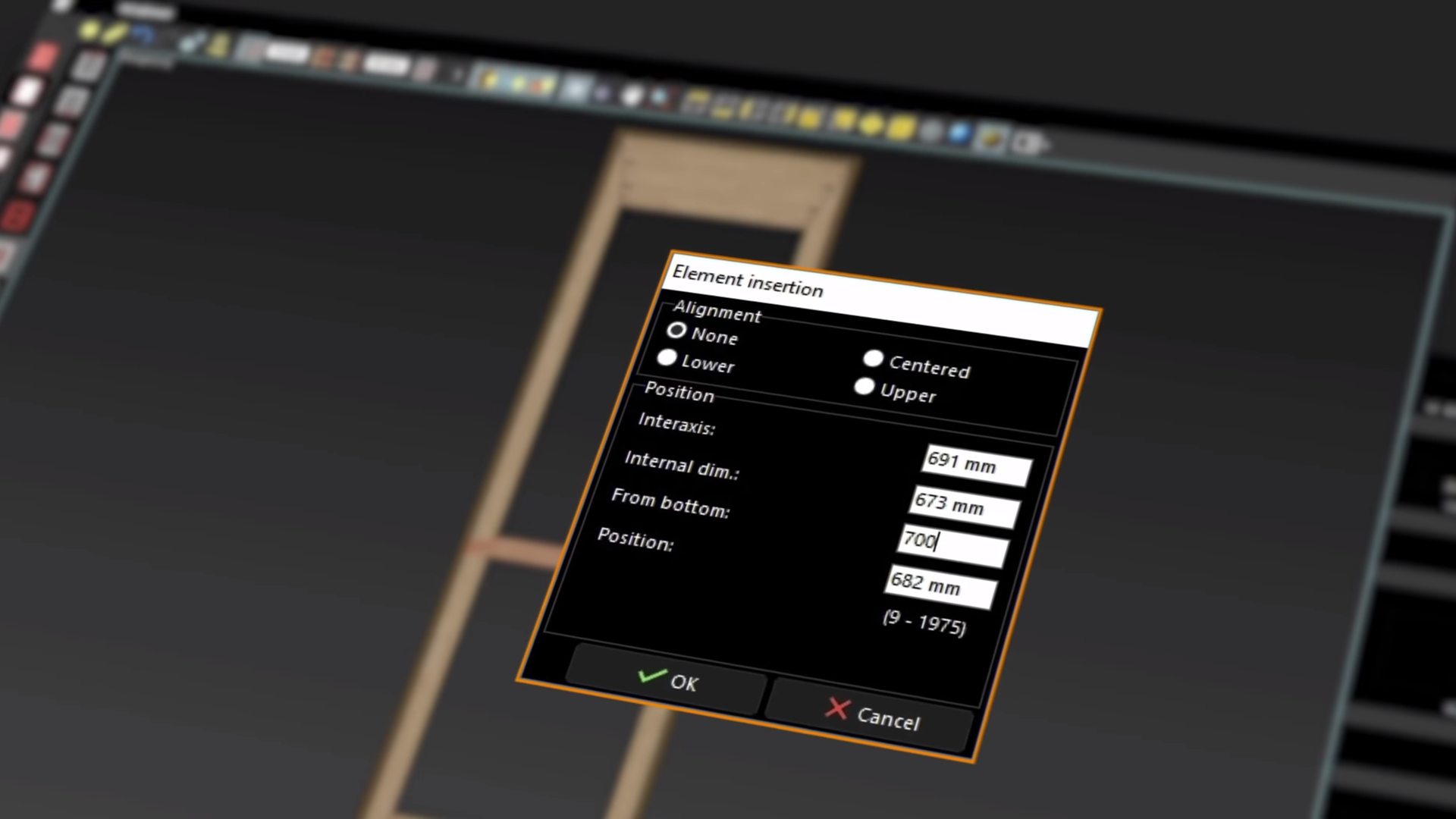 Technology from Italy to the world

In 2018, the company paid more attention to economic, social, and environmental sustainability issues. The economic value distributed by the group stood at 716 million euros, with 88% of purchases from local suppliers in factories in Italy, India and China, 260,000 working hours dedicated to Research and Development activities, 95% of employees on permanent contracts, 443 tons of CO2 saved through the use of installed solar panels, and a 13% decrease in water consumption compared to the previous year (More information at biessegroup.com/sustainability).

Biesse’s participation in Ligna this year was part of the group’s golden anniversary celebratory events centered on the theme of looking towards the company’s “future”.

This year also marks the 10th anniversary of one of its 39 subsidiaries around the world, Biesse Middle East in Dubai, United Arab Emirates. 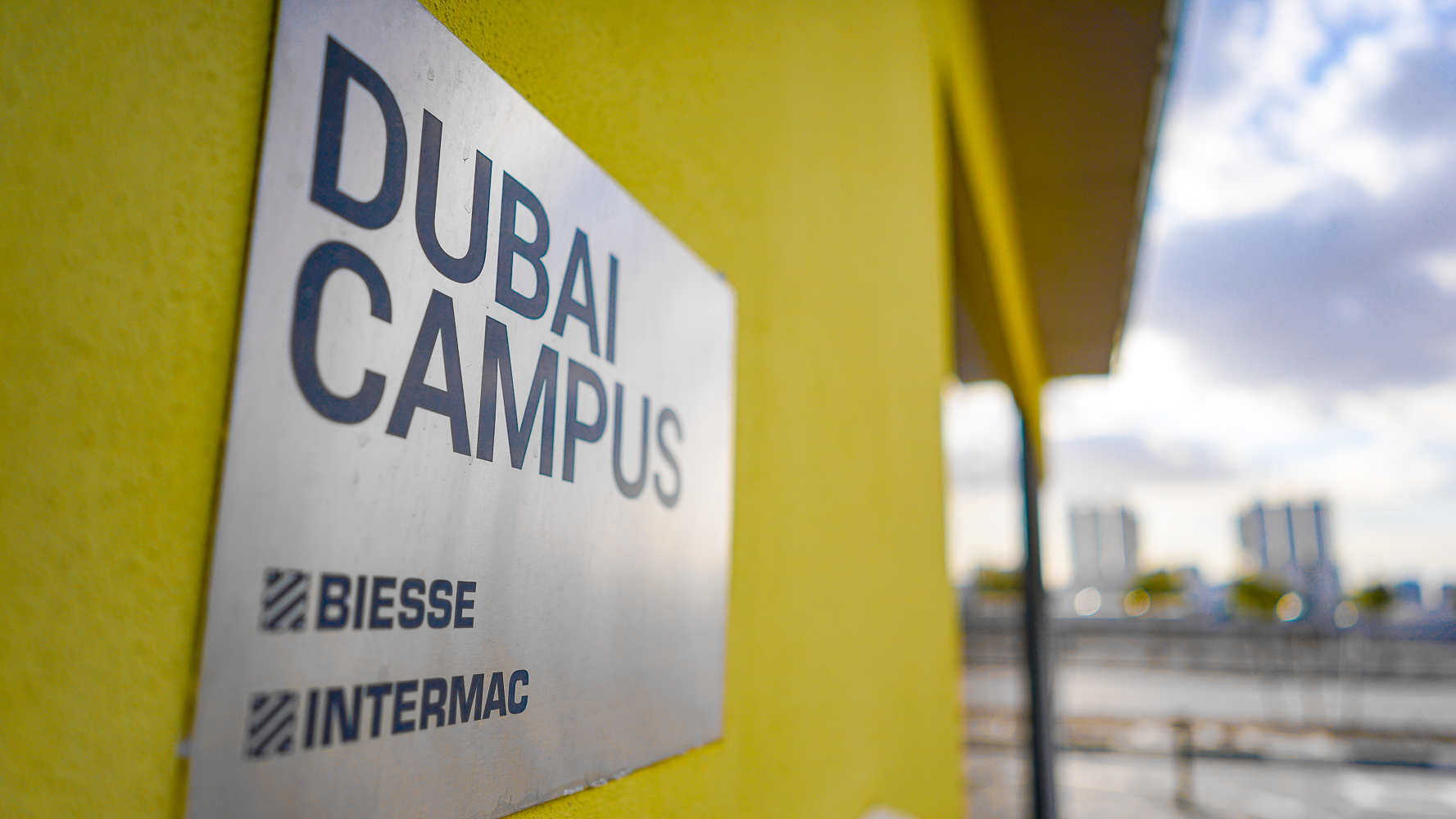 “Our 10th anniversary is a remarkable milestone for the company especially in the Middle Eastern market," says Renato Manganelli, Managing Director of Biesse Middle East. “We are happy to have delivered continuous training and to have enhanced our support services since our inception in 2009. We shall continue to provide first-class products and services to our regional customers with the deployment of our award-winning digital service IoT platform SOPHIA in the next coming months. I believe SOPHIA will bring our support service to even greater heights.”

Situated in Dubai’s Silicon Oasis, a globally recognized technology park that offers 100% foreign ownership and state-of-the-art facilities, Biesse Middle East houses the Dubai Campus, the largest showroom in the region dedicated to woodworking technology. It boasts of a dedicated section for service and spare parts that accommodates inhouse and customer training activities.

Biesse Middle East continues to fulfill the group’s goal of showcasing Made-in-Biesse solutions to customers in the Middle East while offering visitors a chance to interact with experts in the field. The company conducts several open houses each year featuring different topics and technologies, on top of one-on-one demos available on demand and customized to the needs of the customer.

BIESSE S.p.A. - Biesse Group is a global leader in technology for processing wood, glass, stone, plastic, and metal. It designs, manufactures and distributes machines, integrated systems and software for manufacturers of furniture, door/window frames and components for the construction, ship-building and aerospace industries. It invests an average of €14 million per year in R&D, boasting over 200 registered patents. The company operates through 12 industrial sites, 39 branches, and 300 agents and selected dealers, exporting 90% of its production. Its customers include some of the most prestigious names in Italian and international design. Founded in Pesaro in 1969 by Giancarlo Selci, Biesse SpA has been listed in the STAR segment of the Italian Stock Exchange since June 2001, and is currently included in the FTSE IT Mid Cap index. It currently has 4400 employees worldwide.